http://weshouldpractice.com/2012/11/18/book-now-for-gaga-the-unmentionable-by-louise-tuu/
‘Gaga: the unmentionable’ was presented at The Old Folks Association Hall in Gundry Street Auckland as a second iteration of a previous performance at Galatos last year. This version, conceivably a development of last years event and/or a stand alone work with its own poetics, laws, and purpose was performed by Lafitaga Matua, Nisha Madhan, Ilasa Galuvao, Leki Bourke Jackson, and Louise Tu’u. Gaga rendered an intriguing schema that gave me plenty of scope to survey and form my own semiotic interpretations that, for better or for worse exist in a strata of personal bias and naïveté.

Gaga presented a series of themed vignettes underscored by a sincere sentimentality toward family and culture. Most of the ideas appeared to be affiliated with each other , and the word ‘language’ could be used as a kind of echo - locator to read context, meaning, and make connections between the islands of material. I did find the ideas relationships to each other at times elusive, occasionally bridgeless. Within Gaga’s composition Tu’u’s distinct materials behaved collectively more like a floating bricolage than an iteration. For me ‘iteration’ suggests a succession of approximations that build on the one preceding to achieve a degree of accuracy. For me Gaga didn’t direct itself toward accuracy, rather it opened up a large field of connotation to play in.


Gaga seemed preoccupied with playfully teasing and destabilizing status by toying with theatre protocols and deploying a subtly irreverent tone towards various cultural mores. It achieved this through the overall compositional design of the piece, the set, light, sound, and the performer’s delivery of the material. The audience were seated in a transverse configuration facing each other. Performers sat amongst the audience, entering and exiting, whispering to each other for cues. This combined at the beginning with two men offering each audience member and each member of the cast a hot towel both charmed the situation, and set up what was to be a continual hot swapping of performer / audience status throughout the evening.


Madhan lay on the floor making a snow angel on a thin mattress of white flour. A gradual whitening of Madhan’s dark skin seemed to inadvertently nod towards a denaturising of cultures, the ‘whitening’ of language and custom. This was emphasised and layered via many subtle and overt signs; an almost pre-adolescent delivery of Hip Hop beat boxing and Sesame St. gesticulation, a brief monologue about a lo-fi white extension cord of great import, white factory overalls acting as both signifier and subsumer of identity within a local industrial job market, Barfoot and Thompson real estate signs facing away instead becoming white blank placards denying the fiscal value of community, powerful dance music played on laptop speakers filtered into tinny parody, and a noticeably conventional lighting design that seemed altogether deliberate and oddly lacking in irony.


Tu’u’s monologue in Finnish initially threw me, as I was expecting Samoan or English. Her childlike attempts at handstands (chorused by the rest of the cast) were reminiscent of Brazilian capoeira where the inverted body is sometimes considered analogous to constant polarising change in the world. The attempts at inversions foregrounded an aesthetic of childlike physicality repeated in all of the scenes. This quality of the child was at its most vibrant in Lafitaga Matua’s dancing. However the constant prevalence of the childlike physicality in the performers’ demeanours undercut any potential gravitas. Comic tones constantly soaped and rounded off any potentially injurious sharp edges in the material.

The imagination of the child was celebrated in a scene where a piece of cloth was played with and transformed in a game of absurd pretend between Ilasa Galuvao and Madhan, the presence of adulthood refusing to be itself continued to sit in the work like a layer of deliberately ignored dust. Leki Bourke Jackson’s scene in which he wrote a letter as an old man to the contemporary Santa of capitalism, Oprah, asking for a third car also sat in this territory. On reflection I feel that I’ve missed something here. What was the nature of the childlike tone, and what was it doing there in the piece? Did it have aesthetic function or was it more reflective of Tu’u’s general demeanour in the studio workshop process in turn flavouring the casts’ delivery?


An even rhythm and lack of urgency in Gaga threw up a connotation of ‘island time’ and occasionally the pervasive tone of playfulness came slightly undone. In one scene Tu’u overtly made the theatricality of Gaga transparent with the line “We need to get this desperate,” whilst Galuvao self consciously implored the audience to perform a Mexican wave. In that moment I had a sense of the performers trying to disperse a not yet built tension.


Despite Gaga having the appearance of a play, it gradually revealed itself as a real situation involving actors playing themselves as actors, engaging in a series of scenes and improvisations within an interstitial realm of performance where the audience knew them as real people. Occasionally the performers revealed that they hadn’t actually explored the territory of an idea much beyond looking at a map of it. Madhan seemed to be the most equipped to work within these conditions, and it was this as well as Matua’s ability to steal scenes (all the while maintaining a sense of being Tu’u’s mother) firmly anchored some of the interactions.


Gaga: the unmentionable sits congruently within a spectrum of performance currently establishing itself as a kind of ‘new’ orthodoxy of performance making in Auckland at the moment. The piece doesn’t concern itself with delivering meaning hand over fist. It seems as concerned with its own internal processes as it does with dialoguing with its audience in equal measures. The piece reveals Tu’u’s instincts and intelligences as a maker and I find it easy to trust her work. As a consumer of her art I have one sentiment in particular that emerges as a personal desire. What I want from Tu’u’s work is exemplified by the line “We need to get this desperate.” Even if I misheard the line and made it up in my own head, its one thing amongst a generous armload a takeaways that I got from this mindful piece of performance. Thank you.
- December 08, 2012 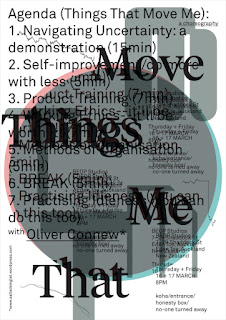 Kristian Larsen
Born in Marton, Kristian Larsen had a relatively uneventful life until he was run over by a Holden Statesman. After being sued by the driver, Larsen found employment in a number of low paying jobs until he discovered social dancing. This in turn led to formal training and knee surgery. Larsen has been personally boo-ed by Douglas Wright, toured the North and South Island as B1 in Bananas in Pyjamas, and was described by a former member of the RNZB as an ‘arsehole with integrity’. Larsen meshes an array of materials including movement, sound, and spoken text. Informed by a spectrum of thinking and practice that includes boxing, butoh, academia, and stand up comedy, Larsen continues developing several areas of artistic practice continuously. "Being a dancer isn’t easy," says Larsen, "but it helps."

"Improvising choreography is like sculpting smoke. The idea is clearly there in front of you swirling and moving. It can be inhaled, felt in the lungs, tasted in the mouth. But it lacks substance, it cannot be grasped or molded. The only thing that can be physicalised is the effect the smoke had on your body whilst it was in there." Kristian Larsen
Art critic Dave Hickey claims that he's never "had any experience of high art that was not somehow confirmed in my experience of ordinary culture—and that did not, to some extent, reform and redeem that."
"Mimicry, I am more and more certain, is the fundamental performance of this cultural moment. At the heart of mimicry is a fear that the match will not hold and "the thing itself" (you, me, love, art) will disappear before we can reproduce it."
Peggy Phelan
"Either you're pretentious or a radical but straddling both lines makes you seem disingenuous to anyone familiar with either demographic"
Anon
"Whatever you are, whatever you commit to, it will somehow find a way to fuck you."
David Simon, The Wire
"They are not there to save us or perfect us (or damn or corrupt us), but rather to complicate things, to create more complex nervous systems no longer subservient to the debilitating effects of clichés, to show and release the possibilities of a life. "
John Rajchman
"But cultures have their problems. Probably their most difficult is their success. They become anal and decadent."
Steve Paxton
"The role of art is to serve no purpose - which is not to say that art lacks purpose...the political in art lies in its refusal to be an instrument. Art speaks only for itself. However this does not make it mere fantasy. Art is deeply committed to the world: it is definitely of the world."
Sally Gardener, Manifesto
"By universalizing the spirit of opposition, the avant-garde's project has transformed the practice of art into a purely negative enterprise, in which art is either oppositional or it is nothing. Celebrity replaces aesthetic achievement as the goal of art. "
Roger Kimball
Types of Failure
1. Accident
2. Mistake
3. Weakness
4. Inability
5. Incorrect method
6. Uselessness
7. Incompatibility
8. Embarrassment
9. Confusion
10. Redundancy
11. Obsolescence
12. Incoherence
13. Unrecognizability
14. Absurdity
15. Invisibility
16. Impermanence
17. Decay
18. Instability
19. Forgetability
20. Tardiness
21. Disappearance
22. Catastrophe
23. Uncertainty
24. Doubt
25. Fear
26. Distractability
Tim Etchells, Matthew Goulish
Brackets2 this time in Yvonne Rainer: (Artist as Exemplary Sufferer) (Artist as Self Absorbed Individualist) (Artist as Changer of the Subject) (Artist as Medium) (Artist as Ventriloquist) (Artist as Failed Primitive) (Artist as Failed Intellectual) Artist as Transcendental Ego (Artist as Misfit)
Christof Migone
Beckett- "I speak of an art weary of puny exploits, weary of pretending to be able, of being able, of doing a little better the same old thing, of going a little further down a dreary road."
Duthuit- "And preferring what?"
Beckett- "The expression that there is nothing to express, nothing with which to express, nothing from which to express, no power to express, no desire to express, together with the obligation to express."
Samuel Beckett; 'Three Dialogues with Georges Duthuit'